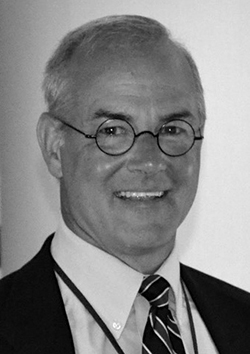 Dan DeMars has lived in Norwich, VT since 1996 with his wife and two sons. As a child, he was fascinated by space flight, notably the Apollo lunar landings. Over the decades, Dan has collected documentation on NASA's Mercury, Gemini & Apollo programs and has met several NASA astronauts over the years (e.g., Cernan, Bean, Lovell, and Carpenter). Professionally, he has served as a management consultant to academia, to the biotech industry, and to independent secondary (preparatory) schools.

"Dan's use of slides and numerous short videos kept us totally engaged in the class. He encouraged class participation and each of us benefited from this every week. He was very organized and easily incorporated our questions and viewpoints into the discussion."

"Dan is dedicated to his subject and is magnificently able to present it keeping us fascinated by details."

"Dan's incredibly deep and detailed knowledge of the various NASA programs was amazing, almost scary (for example, he knew the actual five digit sample number the Apollo 15 astronauts gave to a particular moon rock sample!). He led discussions very well, from the serious to the humorous. The videos he presented were well chosen and enlightening. Each class was presented on a linear scale, timed out well and never boring."