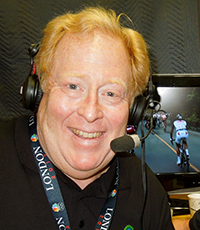 Peter Graves, a Vermont native, has played a prominent role in the ski sport since his racing days in the 1960's and 1970's. Later he became as U.S. Team coach and an administrator for USSA. He began his broadcasting career with ABC Sports at the 1980 Olympic Winter Games in Lake Placid and was most recently an alpine skiing announcer at the 2018 Olympic Winter Games in South Korea. In sum, Graves has been a broadcaster at 11 Olympic Games. He served at Harvard College as the Head Nordic skiing coach from 2002-2008 and was elected as the FIS Ski Journalist of the Year in 2016.

If anything this course exceeded the course description.

Peter's deep experience in skiing and the media allowed him to make each class super interesting.

Peter was amazing with his knowledge and connections to The Tour. He arranged for us to hear professional riders and supporting professionals via phone calls. Quite a special treat to be able to hear and ask questions of them.

Very engaging, at all times

Peter Graves personally knows just about all the key present and many past players in US competitive skiing and brought a vast knowledge base to the class. He's enthusiasm for the sport was infectious.